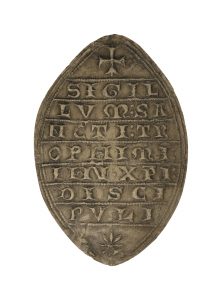 The present project aims to study the materiality and the socio-linguistic aspects of the use of ostraca as a writing support. For this purpose, it will draw on a corpus of unpublished documents from Athribis in Upper Egypt. These inscribed sherds can be dated to the period from the Ist c. BCE to the VIIth c. CE ; they are mainly inscribed in Egyptian (hieratic and demotic, ± 80%) and in Greek (± 16%). There are also some in Coptic and Arabic, as well as drawings. The approach will be interdisciplinary, not only  in  terms  of  the  philologies  involved  (« classical »  Egyptian,  demotic, Coptic,

Greek, and Arabic), but also by drawing on other disciplines, such as ceramology. The ceramological study will address the different material aspects of the inscribed sherds (measurements, analysis of the fabric, vessel type, used parts, origin in Egypt or abroad, dating), which will allow us to determine whether certain shapes, sizes, types of pottery or parts of vessels were preferred for writing, perhaps even as a function of the type of text that was to be inscribed. On the basis of these finding, the choices made by the scribes will be examined: were they conscious or did they depend on different contingencies ? Through another range of questions, driven by the philologists, we will study the function of the texts inscribed on these supports : the aim is to try to determine the motivations of using pottery sherds, as opposed to papyrus, and to define the nature of the producers and users of these texts. In this context, a typology of the texts written on ostraca will be developed for this corpus, that can then be compared to finds from other sites in Egypt. Special attention will be given to text types present on ostraca elsewhere, but absent in Athribis, as well as to those that, inversely, are attested in Athribis but not, or rarely, at other sites, or not on ostraca. One aim is to establish the reasons why these different text types were written on potsherds: were those really a cheap substitue for papyrus, often thought  of a being expensive (which needs to be qualified)? Are these sherds reserved for text of lesser importance and/or short-term use? Other questions concern the extent to which the redaction on ostraca might have influenced the form of the text (layout, length, writing size, etc.), the circumstances which lead to privileging the use of hieratic, demotic or Greek (and later Greek or Coptic, respectively Coptic of Arabic), or whether some text types are only attested in one language/script. Finally, given that the place of discovery is in close vicinity to an Egyptian temple, one has to determine the role the writers and recipients of texts written on ostraca played within the religious, social and economic institution that this sanctuary constituted in the Graeco-roman era, and then the monastery which was established there during the later phases of its occupation.