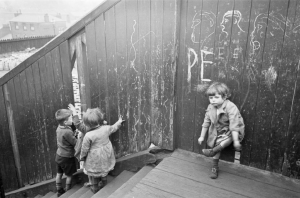 This research project aims at analysing the street writings (graffiti, wall chalkings) of the British Home Front during the Second World War. These traces of everyday writing are an ephemeral and neglected aspect of war cultures. They show that the urban public space was not only filled with propaganda posters but also saturated with anti-Semitic inscriptions or graffiti supporting the enemy. The project will also explore wartime alarms through “suspicious” graffiti: in the summer of 1940, when the fear of enemy invasion was at its height, several people submitted reports of graffiti and wall markings interpreted as spy codes or maps.

This project will draw upon an untapped source: the photographs and fieldwork studies on graffiti and wall chalking undertaken by Mass Observation from 1938 to 1943. One of the main premises of our project is that these messages cannot be dissociated from their material dimension (wide variety of media used, graphic and typographical forms, games between writing and image, poster diverting, dialogical aspect) and their spatial dimension (streets, public toilets, walls, telephone booths, tree trunks). We will examine how these “spaces of dissension” fit into the urban ecology of societies at war.

This original research project therefore proposes to combine epigraphy, the anthropology of the written word, and the social and cultural history of war. It will result in the publication of two articles (in English and French) in international peer-reviewed journals. In addition, two scientific events will be organized: an exhibition presenting these British Home Front graffiti, and an international conference on war graffiti in the 19th and 20th centuries.