Using playing cards as a writing device in the XVIIIth century 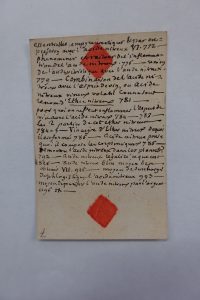 The project « Using playing cards as a writing device in the XVIIIth century » consists in gathering a corpus of playing cards used for writing, which will allow to document the various uses covered by this underestimated practice, such as family or trade accounts, social, scientific or literary purposes. Relying on a previous phase of research in Paris and Swiss collections which started, without any specific funding, a few years ago, this first year of funding will allow a more systematic prospection, particularly in Paris, Bordeaux and in Belgium, in several collections, some of which have been already catalogued, while some remained almost unnoticed.

Besides a material description, providing clues for geographical origin and date of production of the cards, studying this corpus will aim at cross-referencing analyses of the graphic layout with textual contents of the written cards, in order to characterize high proficiency uses (such as cards used for teaching or scholarly annotations) and other less demanding ones, as well as finding out some graphic devices shared by all users.

The process undergone in some areas during the 18th C. of a progressive formalization of graphic norms, as applied to the cards used as bibliographical reference-cards, has already been studied. Yet such historical narratives merely overlooked the context of a wider everyday practice of writing on cards, which developed outside of the librarian’s “professional” sphere. One aspect of the project will deal with relating various “façons de faire” actually documented in collections with the early application of graphic norms in bibliography. A database, illustrated with digitized images, will comprise XML-TEI enriched transcriptions. It will allow an inventory and comparison of material aspects and lay-out, helping to identify hands, to evaluate clues relating to addressees, and to the conditions of dissemination of the written cards.

This project aims at analyzing a writing practice which is instrumental and documentary, on a paper device mainly devoted to action-related messages, to working notes, pedagogic games or research tools. The selected corpus will be presented in a final 1-day research meeting, led by the project members as well as colleagues taking part in the “Documentality and writing practices” section of the IRIS Scripta, welcoming PSL research staff as well as French and foreign specialists. In case a further financial support was accepted for the following year, during this meeting would also be launched a collaborative site, allowing resarchers, professors and students to contribute to the project by annotating the cards available through the database.