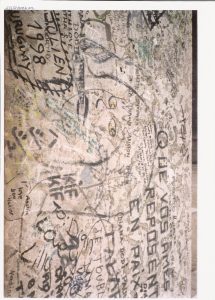 Reuniting historians, linguists and anthropologists this work is part of the revival of the sciences of writing. The recent importance attributed to urban writing raises two types of questions which brings together the ancient distinction between civitas –defined by all inhabitants- and urbs – defined as urban space :

1 How are theses public spaces of the civitas, that are often conceived as spaces of circulation of ideas, shaped by urban writing ? What are compulsory, forbidden, censored, tolerated writings?

2. From the point of view of how the urbs is managed what role does writing play in the organization and the administration of streets, public squares, buildings and other specific places?

Every contribution explores current practices of different historic and geographical contexts. The first part groups several inquiries observing repressive practices by authorities: what are the writings concerned? Who are their authors? What justifications are given to that wich is repressed ?

Several critical situations as those known in Spanish cities under the Inquisition or those in Paris during La Commune reveal the slow inevitable rise of the power of writing in urban center.

Except moments of crisis, certain urbanistic reforms reveal the strength of the most harmless writings. To impose the numbering of houses under Habsburg from 1727 does

not happen without provoking a rebellion, because the number is perceivedas imposing an egalitarianism unbearable for the dominant groups

It’s the same a century later in Barcelona, when the engineer Cerda to who has been entrusted the transformation of the city ( 1859 ), failed to impose a new list of the street names conceived to favor urban flow. The traditional place-names connected to the history of the city were kept. Closer to us, in 1997-1998, the city of Mopti ( Mali) was obliged by the World Bank to create a system of addresses totally unsuitable to the city.

The last part of the book adopts a sociolinguistic point of view : what politics of language serves the urban writings? What conception of the writing do they carry? What presides over the choice of odonymes?

In every question there is an analysis of the terrain: the analysis of the display of poster in Montreal dealing with the Frenchifying of writings in the city. A sociolinguistic survey of the particular status of commercial signs in China wich are at once an ideological vehicle and support of the reforms of the writing. Finally, a research on the odonymes of Maputo (Mozambique) which separates the city in two: an official, rich, administered city, and a popular, poor city where reigns a signposting system created by the inhabitants.