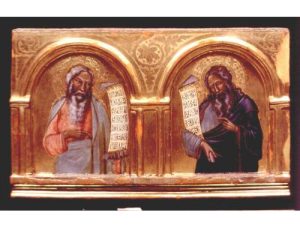 Pseudo-script is often found on medieval and renaissance artworks, decorating the cloths of religious figures, the textile ornamentation of interiors, the scrolls or books held by sacred figures, in a great variety of contexts and media, often incorporating characters or near-letters of Oriental alphabets. Set mid-way between ornament and actual writing, it has been variously employed to connote alterity, as a sort of encryption, as the product of a deft hand, as a hint at a lost or unattainable level of communication among sacred figures. Such a phenomenon as a whole, therefore, appears to elude a single function or a strict definition. It in fact emerges as both rich and nuanced, and so dense with expressive potential that could be treated as the visual embodiment of a sort of rare language, whose use and register may vary, given the context and the purpose of its usage. Nevertheless, one should not limit the analysis to its written appearance, thus considering it as a sort of secondary manifestation, but rather focus on its intrinsically visual dimension.

Arguably, it also shares similarities typical of other ‘threshold’ notations – that could be considered in comparison – such as knots or apotropaic signs, by offering the viewer a sort of intricate pattern, something puzzling to the eye and challenging for the mind.  Thus, it is also a fascinating visual element, to be considered within the formal architecture of the image, as a device capable of activating different layers of response.

The current project proposes an analytical survey of Italian cases, between the end of the XIII and the XVI centuries, trying to explore the notion of an aesthetic of ‘illegibility’ seen in relationship with the mythical evocation of a Biblical past, the symbolical superimpositions (if any) between pseudo-script and secret, magical or mystical languages, and the debate about ‘sign’ in Medieval art.