The monumentalized page: Manuscript, print and epigraphy during the Renaissance – Italy, France, Spain and the Holy Roman Empire (1480-1550) 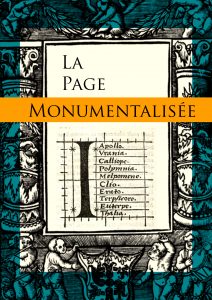 Ancient inscription, both on its own and monumentalised on tombstones and other architectures, play an important role in the renewal of the manuscript and printed page between 1480 and 1550. To follow the history of this phenomenon requires a multidisciplinary approach that will traverse Palaeography, Material bibliography, Book history, Literary history, History of art, and History.

This project is state of art in its analysis of a vast range of explanatory factors, in particular the question of power and how it both legitimises this aesthetic and takes part in a new editorial modality. Our analysis will consider these questions from an interdisciplinary perspective. Palaeography will examine it from the ancient and medieval aspect to create a general framework, while History of art, through the history of miniatures, will show how the question arises in the Renaissance manuscript bolstered by antiquarian science. A second consideration will be the link between the layout and the creation of the text: broaching the frequent links between humanists, poets and printers, which often induced great creativity for printers (G. Tory would be one of the best examples), and spread the all’antica aesthetic at the same time as they generalized the use of italic characters. A third and final aspect to consider will be how the (epigraphic or numismatic) inscription which appears in the text relates to the image, of which the success of the ‘emblem’ is only one consequence.

This comparatist perspective is vital, given that the history of the phenomenon focused by the project still remains too often compartmentalized, or over-simplified by national evolutionary logics. Initially, the project will focus on Italy, Spain, France and the Holy Roman Empire: the material will be sufficient for the organisation of the first two workshops, but its expansion to Flanders or to England is not excluded