THE BOOK IN ANCIENT AND MEDIEVAL MEDITERRANEAN. A TRANSVERSAL HISTORY 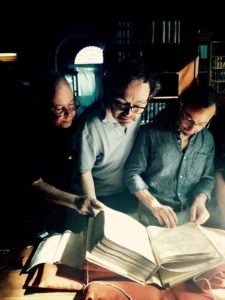 The project consists in the organization of an international symposium (autumn 2020) on the theme The book in the ancient and medieval Mediterranean. A transversal history and in the publication of 10 entries in the Encyclopedia of Mediterranean Humanism (http://encyclopedie-humanisme.com/?-English-). It is the intermediate stage of a vast research programme articulated in several phases, the first two of which have come to conclusion (2015-2017 and 2018-2019, the latter was co-finances by SCRIPTA). The object of this project is the manuscript book, conceived as a tool for focusing on the dynamics of the cultural interaction between the civilizations speaking Byzantine Greek, Latin, Arabic, Jewish and Syriac languages, that shared the Mediterranean space. The approach will be based on the study of (a) the scribal practices (from the paleographic and codicological points of view), (b) the methods of producing and performing texts (genetics of texts and reading practices), (c) the ways books are preserved and transmitted (history of texts, archives, collections and libraries). The aim of the project is the recognition of the points of contact and of the differences between the these cultures, considered as components of a field of interconnected forces. The analysis will concentrate on the period between the 6th and the 9th centuries. The disciplines involved will be paleography, papyrology, codicology and diplomatics