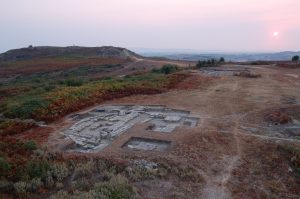 The Greek city of Apollonia of Illyria in Albania is a colony of Corinth founded around 600 BC and active until the 3rd century AD. It is a frontier city (between greek and illyrain worlds, between Greek and Latin languages). It’s representative of the peripheral normal greek cities. An albano-French archaeological mission has been active since 1994. It published a first corpus of the greek and latine inscriptions. This one is restricted, because it takes into account only the monumental inscriptions and not the discoveries of the last 15 years.

The project intends to conduct a long-term, global study of the many uses of writing in Apollonia and their inscription in the space of the city and in the various strata of Apollonian society, since the time of the founding until the abandonment of the city at the beginning of the Byzantine era. It is structured in three stages: the establishment and documentation of texts using a combination of innovative processes (RTI, scan3D and photogrammetry on land and by drone) and the development of a database related to the global GIS of the site; the study of the support of the inscriptions and their archaeological context, allowing the precise dating of the artifacts and their insertion into functional units: imported and locally produced ceramics, architectural decorations and blocks with career and winding marks, coins and transport amphorae, with the support of physicists and petrographers for the characterization of the supports and their origin; the study of the diffusion of the use of writing in different social environments throughout the urban and suburban landscape, and the rhythms of transformation of scriptural practices (for example, the study of the transformations of the alphabets with the help digital instruments for the automatic identification of shapes and of the details of the incisions, …).

The project will be developed at PSL by the UMR 8546-AOrOc (CNRS, ENS, EPHE, Collège de France) with the CAOR of Chimie ParisTech. The research will result in a monographic publication that will complete the corpus of Greek and Latin inscriptions of Apollonia, in an article of collective synthesis and the setting on line of the new epigraphic database associated with the GIS of Apollonia. The epigraphic campaign will also aim to train French and Albanian students. A series of educational panels dedicated to scriptApollonia project will be developed for a lasting presentation to tourists in the archaeological park and in the Apollonia Museum (AOrOc-University of Cergy-Pontoise). The project also aims to propose a standard for global study of scriptural practices in an ancient city over the long term, in the perspective, ultimately, to multiply the case studies that can be compared between them.