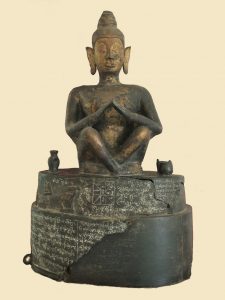 Epigraphy is a cultural practice that can be understood by means of different tools (palaeography, statistics, indexation, mapping, etc.), all working with merely textual or philological considerations. Still, epigraphy can also be apprehended through the epigraphic fact per se. In this regard, Ramsay MacMullen called “epigraphic habit” the decision to turn a text to stone (or metal). This term, at first pertaining to the Latin world, was then reused or quoted by specialists working on other areas (ancient Greece, India), who reflected on this customary practice. In turn they have questioned the implicit usage of the inscribed letters rather than the explicit message they convey—or, more accurately, the relationship between the message and its material form.

Through an analysis of exemplary inscriptions and other available historical data that are found in Thailand, Laos and in some part of Burma, the project “Script Taken Literally” seeks to determine the “epigraphic habit” of the T(h)ai. Its aim is to propose an innovative reading of inscriptions, alongside with their material and context, and to look for a better understanding of the “tangible” meaning and of the social function of the epigraphy in the ancient Thai Buddhist kingdoms, and more broadly in Southeast Asia.

Purposes and intentions that underly the Thai inscriptions appear to be highly diverse, as show the numerous different kinds of writings that were recorded throughout centuries on various physical mediums. Fixed on stone for its resistance and durability, Thai epigraphs were generally written on public stelas or edifices that were displayed (or “exposed”) on or next to other bigger monuments. Their message were thus designed to be lasting, public, and non-confidential. On the other hand, inscriptions also include elements that were obviously meant not to be understood by commoners, such as complex astronomical calculations or encrypted Buddhist wordings that only scholarly monks were able to decipher.

Clearly, the epigraphic habit in the Thai Buddhist context embraces a wide range of facets, some of which are related to the aim, the ideology and the psychology of its stakeholders. If the purpose of the epigraphy is to fix or to pass on pieces of information (event, external message and story), could it inform “by reflexion” about itself, as well as about literacy, literature and worldviews? To what extent the “epigraphic habit” determines a “reading habit” as a counterpart? What would reveal a comparision between identical or equivalent messages when transmitted on different supports?

This project seeks to answer these questions, and aims to find out what the Thai epigraphy, if “taken literally”, has to say about itself and what it discloses—or rather the opposite, intends to conceal—about its political, religious, social and ideological function.