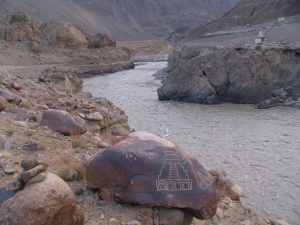 A multilingual and multiscript crossroads once connected South Asia with Central Asia at the “roof of the world” (bam-i duniya). Intertwined passageways through the Upper Indus river and its tributaries descending from the Western Himalayas, Hindu Kush and Karakorum mountains directly connected the main arteries of the northwestern Indian subcontinent to the so-called Silk Routes in the Tarim Basin (western China). The banks of the rivers are the repositories of one of the world’s most significant concentrations of rock art. From prehistoric times to the beginning of the 2nd millennium CE, visitors and local residents have engraved about 70,000 petroglyphs and 6,000 rock inscriptions into the dark patina covering the boulders on the banks of the Indus through Ladakh (state of Jammu & Kashmir, India), Gilgit- Baltistan and Khyber-Pakhtunkhwa (northern provinces of Pakistan). Written documents and visual sources are scarce for the region and rock art constitutes the main material to reconstruct the various cultural sequences of the Upper Indus over time. In between the 1st c. BCE and the 11th c. CE rock inscriptions in Indian, Iranian, Tibetan and Chinese languages and scripts were engraved. Although previous findings demonstrated their value for reconstructing routes for long-distance cross- cultural mobility, trade, and religious transmission Upper Indus rock art awaits more through contextualisation. We propose to put the various corpora of rock inscriptions into dialogue not only with one another but also with the visual evidence, i.e. petroglyphs. The project will also tackle material aspects of rock art. Also, trough connecting rock art to its natural and built environments we will be able to insert it into the larger geographic, archaeological and historical framework. The inclusive and interdisciplinary approach of the project relies on digitisation, GIS mapping and recording of rock art in the form of multiscale relational database. Besides being a new scholarly effort, digital techniques are a tool to preserve the cultural heritage of the Upper Indus. The open air galleries are under grave threat: to meet demands for energy, water and hydroelectric development, planned infrastructure projects on the upper Indus River will submerge a majority of the epigraphic and visual corpus in the years to come.