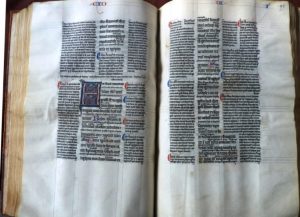 Glossae-R is a scholarly digital edition of the Sacra pagina (glosses associated with ‘Holy’ Scripture, and determining its interpretation). We edit, as first step,

These corpuses are complementary. They fit into the scientific issue of Scripta and are a challenge for digital edition. Between the end of the 11th and the middle of the 13th century, the latin text of the Bible read in schools takes a new codified form. The ‘sentences’ of the masters and the excerpta of the Church Fathers are reformulated, canonized by their insertion in the margins of the glossed Bible, ‘Scripture’ by excellence ; they form together the sacred Page whose authority makes law. When the Humanism and the Protestant Reformation will reject the Glossed Bible as a by-product of the first scholasticism, they will often quote, instead of it, the Greek and Latin Fathers, that they read through the Catena aurea, new Gloss on the Gospels. But the Catena too is, in spite of appearances, a chains of chains, inherited from the Carolingian and Byzantine rewritings of Fathers.

Glossae-R restore – thanks to digital – the network of medieval interpretations of the Bible, in order to renew the documentary basis for studying the interactions between the page organization (layout), codification and canonization of glosses, rewritings and translations, interpretations and diffusion of the Bible.

Glossae-R resort to the potential of the digital technology to overtake the frames of the paper edition, limited by the size of the material page.

Glossae-R adopt a strategy which aims at both the development of the scientific research and the progress of the digital humanities. Our first aim is foremost the acquisition and check of new scientific data and the critical operations which could not be automated.

Glossae-R gets an important volume of data verified by confrontation of manuscripts, critical standardization of written medieval forms, reproduction of sources in original languages, bibliography, lists of manuscripts etc.

Glossae-R prepares the automation by the artificial intelligence of the processes of recognition (segmentation, OCR, comparison of texts) applicable to thousands of manuscripts and editions of the Glossed Bible and of the Catena.

Glossae-R offers an instrument for analysis of the edited text and of the stratigraphy of sources. Texts are published in XML / TEI format and questionable by specific fields of research: biblical text, prologues, glosses, quoted authors, identified authors, textual variants, collated witnesses, biblical references in the glosses, quoted lemmas, words transliterated in not Latin languages, etc.