Digital epigraphy for hieroglyphic inscriptions: the corpus of priestly inscriptions from the Karnak Cachette 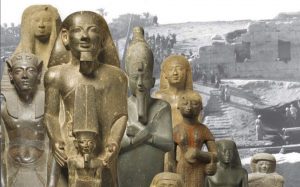 Building on the Karnak Cachette database launched in 2009, the project Epi-CK aims at creating an electronic corpus of the texts inscribed on the objects (mostly statues) from this cache found by Georges Legrain between 1903 and 1907 in the temple of Amun. They include a number of royal effigies of all periods but most of the statues belong to the priests who officiated at Karnak from the New Kingdom to the end of the Ptolemaic Period. Therefore, the Cachette provides a wealth of information on the clergy and the evolution of local cults. Version 1 (2009) and version 2 (2012) of the Karnak Cachette database, which were published online (www.ifao.egnet.net/bases/cachette) through a cooperation agreement between the IFAO and the Egyptian Supreme Council of Antiquities, have provided a highly structured and modifiable framework for the study of data.

The Epi-CK project was developed in collaboration with Vincent Razanajao, who has created a user-friendly tool for encoding the transliterated hieroglyphic texts into XML files (Xefee), and Emmanuelle Morlock, who has worked on the implementation of TEI/Epidoc standards in this project and is currently finalizing the design of the online database which will allow the publication of the corpus and make it possible to systematically search for textual and metatextual data. A first part of the corpus — the Twenty-Sixth Dynasty inscriptions — has now to be edited for publication, which is the main concern of this application.

Télécharger [117.26 Ko]
Télécharger [0 Ko]
previous next
Share
We use cookies to ensure that you have the best experience on our website. If you continue to use this site, we will assume that you are satisfied with it.OkNo