Copting documents : from editing to exploiting 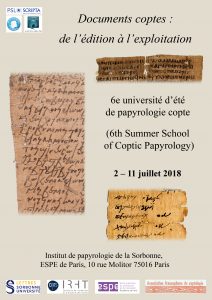 For a little more than ten years, the publication of Coptic documentary texts has been encouraged and enriched by international summer schools held in connection with little-known or poorly exploited collections. These summer schools aim to teach the issues and techniques of publishing Coptic documents, and their results are published in a collective volume. At the same time, the use of numerical tools has progressed (encoding of texts in databases, digital tools of paleography), at a rate such that it produces discrepancies between the large number of texts and tools available on the one hand, and the processing of data provided by the texts on the other hand, especially from the linguistic and paleographical point of view. The aim of the project is to try to reduce these discrepancies, first by organizing successively in Paris (Institute of Papyrology of the Sorbonne) the 6th summer school of Coptic Papyrology, which will bring together about fifteen students and a dozen speakers, then by holding a panel bringing together again some of the speakers from the summer school, as well as others, and aiming to discuss the issues of a common policy in paleography.