Advertising law in the Middle Ages. A cross examination of Medieval stone charters 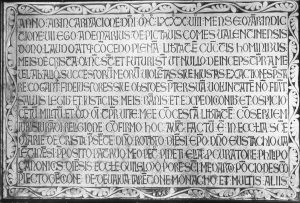 The program Advertising Law in the Middle Ages. A Cross examination of Medieval Stone Charters gathers several institutions of the IRIS SCRIPTA. It intends to lay the foundations of an interdisciplinary reflection on the links between public writing practices and the practice of law in the written culture of the Western Middle Ages.

It takes as a starting point the notion of “stone charter” which combines within a single syntagma a diplomatic category and a hard and durable material. It refers to a great variety of medieval inscriptions presenting similarities with the medieval diplomatic documentation of charters  and  diplomas. It   also   challenges   the   ability   of epigraphic   practices   to   ground, affirm and transmit the law, and thus raises a large number of questions about medieval literacy: Is, for instance, the communication gesture of affixing an inscription in a city “legal” by nature? How to approach such a gesture of public display in the diplomatic scenario? Does the effect produced by the epigraphic object acquire, in its means (localization, form, lettering) a symbolic, pragmatic, or even performative reality? If so, what are the practical conditions of moving from a diplomatic written act to the exhibition of its contents? The research program Advertising Law in the Middle Ages. A Cross examination of Medieval Stone Charters aims to address all these questions from an anthropological perspective, that of the link between legal action and graphic gesture, and in the context of medieval public writing.

The chronological context considered in this program is that of a very long Central Middle Ages period, from the 11th to the 14th century, and the inventory of the “stone charters” focuses on a large part of Western Europe. In any case, these theoretical frontiers in time and space will often  be  crossed  in  order  to  approach  the  phenomena  of  structure,  permanence  or

transformation which allow, in dialogue with the uniqueness of each document, to identify the graphic and language implications of these complex objects.

The research program is conceived as a cycle of seminars leading to the publication of a bibliographic and thematic survey, as well as to the publication of the corpus gathered during the research. In doing so, it gathers in the study of specific objects specialists in diplomatic, paleography, epigraphy and history of law to approach in a global perspective every gesture of public writing, trying to develop a method able to overcome the cleavage between diplomatic and symbolic function, and to explore the notions of “trace”, “imprint”, “image” and “echo”.