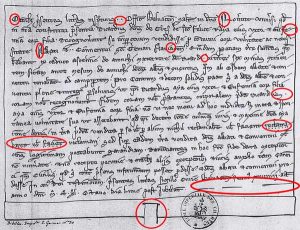 ELEDA-Electronic on LinE Diplomatic Album tends to provide a research and educational tool which has been undervalued by traditional diplomatics’ community. That is, the development of an album containing all kinds of written documents, such as royal and episcopal acta, private deeds or administrative records. These original sources will be supported by transcripts and translations, and accompanied by detailed explanation on their type and content as well as the context of their production. Their diplomatic, as well as their paleographic, codicological, philological (if required) features will also be studied. This project will develop both a tool for research and a resource for learning.

ELEDA is based on an earlier Ecole des chartes’ project developed within the THELEME application (http://theleme.enc.sorbonne.fr/dossiers/), but this prototype confines itself to French medieval charters and records only. ELEDA proposes three significant new developments which reflect the changing needs of the diplomatics’ community. The chronological field will be extended from Antiquity to the contemporary period, and the area from European to non-European space. Morever nature of documentation will not only include acta, but also administrative records. The use of digital technology does not only facilitate access and reading, but also research work. Thanks to a basic sorting or cross-referencing structure, together with a detailed indexing process, users will create straightforward subcorpus of documents. This will enable comparisons to be more easily made, to offer new thematic approaches and  dentify new sources of enquiry to be explored.

This project has been conceived by the Ecole nationale des Chartes in association with the Ecole pratique des hautes études. French and foreign international experts, already working together either on personal capacity or on institutional basis, will contribute to its development. This project already got an Iris SCRIPTA’s support to have its reading interface redesigned. The next step in year 2018 is to establish a first data base of about 100-120 documents, using the files currently existing on Theleme. The platform will then be tested before being opened out to international contributions.

next
Share
We use cookies to ensure that you have the best experience on our website. If you continue to use this site, we will assume that you are satisfied with it.OkNo