“Semiotic and diffusion of an Amerindian bounded system” 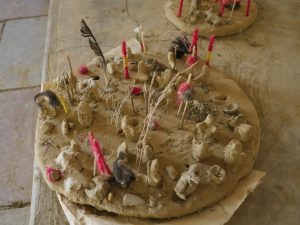 This project will focus on the analysis of a single writing system, unique in the world, the Andean writing llutasqa from the region of Chuquisaca (Bolivia), which is mainly used to transcribe the quechua language. This writing system is characterized by a logo-syllabic semiotic structure (transcribing either semantic unities or syllables, often using the rebus technique) and a bounded pragmatic setting (it is only used to transcribe a limited corpus of texts which are deemed to be orally memorized). This Andean writing system is unique, because it only exists in three dimensions (each type is composed of different materials, including clay, wood, pieces of textile, etc.) and its use is restricted to the Period of Lent, only two weeks before Easter (after ritual use, texts are destroyed).

This project is structured according to two main axes: first of all, a semiotic study of the texts transcribed by this script (linked to a definition of its area of diffusion) ; secondly,  a detailed description of its learning procedures and of its micro-institutional pragmatic. An in-depth fieldwork investigation lead by a pluri-disciplinary staff (anthropologists, linguists and historians) is the necessary condition for this documentation project. It will lead to a better understanding of the semiotic and institutional factors which enabled the invention, propagation and stabilization of this Amerindian bounded script.